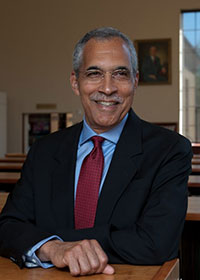 Claude M. Steele, an internationally renowned social psychologist whose work is grounded in the systematic application of social science to problems of major societal significance, is the I. James Quillen Endowed Dean Emeritus and the Lucie Stern Professor in the Social Sciences Emeritus at Stanford University.  Previously, Dr. Steele served as the Executive Vice Chancellor and Provost at the University of California at Berkeley.  Dr. Steele also served as Provost of Columbia University.  Dr. Steele is best known for his work on stereotype threat and its application to the performance of women students and students of color in the academy.  He is the author of Whistling Vivaldi and Other Clues to How Stereotypes Affect Us and dozens of articles in refereed journals.  Dr. Steele is an award-winning teacher who has been elected to the American Academy of Arts and Sciences, National Academy of Education, National Academy of Sciences, and American Philosophical Society.  He holds honorary doctorates from the University of Chicago, Yale University, Princeton University, Northwestern University, DePaul University, Claremont Graduate University, University of Michigan, and University of Maryland, Baltimore.