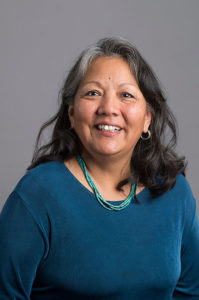 Cassandra Manuelito-Kerkvliet, former President of Antioch University Seattle, was the first Native American woman to ascend to the presidency of an accredited university outside the tribal college system. During her tenure at Antioch University, new scholarships were established, including the Richard Norris Native American Scholarship and the AUS Board of Trustees Scholarship. New innovative programs include the Institute of War Stress Injuries and Social Justice, Drama Therapy, and Center for Teaching and Learning. In alignment with Antioch’s commitment and leadership in sustainability, Dr. Manuelito-Kerkvliet signed the American College and University President’s Climate Commitment in 2008 and committed that all of its construction and building renovations would be at least LEED Silver. She serves on the Seattle Community Colleges Chancellor’s Advisory Council. She is a member of the executive board of Washington State Campus Compact and the Board of Directors of Higher Education Resource Services, and the Washington Women’s Foundation. Dr. Manuelito-Kerkvliet is the embodiment of her great, great grandfather, Chief Manuelito’s teaching “Education is the ladder to success. Tell my grandchildren to climb that ladder.”