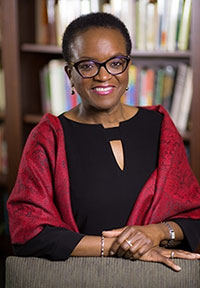 Valerie A. Smith, became Swarthmore College’s 15th president in July 2016.  President Smith, a distinguished scholar of English and African American literature, began her career as an academic at Princeton University.  She later joined the faculty at UCLA where she eventually served as chair of its Interdepartmental Program in African-American Studies.  Dr. Smith returned to Princeton in 2001 as the Woodrow Wilson Professor of Literature and Professor of English and African-American Studies and later became the founding Director of Princeton’s Center for African American Studies.  She received the President’s Award for Distinguished Teaching from Princeton University in 2009.  She was appointed Dean of the College at Princeton in 2011 and her responsibilities included oversight of the undergraduate curriculum, residential college system, undergraduate admissions, and financial aid.  President Smith is the recipient of fellowships from the Fletcher Foundation, Guggenheim Foundation, and National Endowment for the Humanities.  President Smith received an honorary degree from Hong Kong Baptist University in 2016.