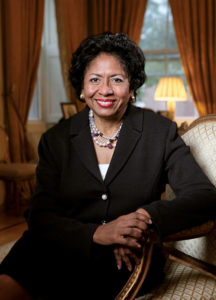 Dr. Ruth J. Simmons was appointed 8th President of Prairie View A&M University (PVAMU) in December 2017 and is its first woman president.  She served as president of Brown University from 2001 until 2012—the first African American to lead an Ivy League institution.  Prior to becoming president of Brown, she served as President of Smith College, the largest women’s college in the United States, where she launched a number of important academic initiatives, including an engineering program, the first at an American women’s college.  President Simmons is the recipient of numerous honors, including the 2001 President’s Award from the United Negro College Fund, the 2002 Fulbright Lifetime Achievement Medal, the 2004 Eleanor Roosevelt Val-Kill Medal, the Foreign Policy Association Medal, the Ellis Island Medal of Honor, and the Centennial Medal from Harvard University. President Simmons is a member of the National Academy of Arts and Sciences, the American Philosophical Society, and the Council on Foreign Relations.  She serves on the boards of Fiat Chrysler Automotive and Square and several non-profit boards.  In 2011, Brown University’s faculty bestowed upon her its highest honor, the Susan Colver Rosenberger Medal.  In 2012, she was named ‘chevalier’ of the French Legion of Honor.  President Simmons is the recipient of 34 honorary degrees from some of the worlds’ finest colleges and universities, including Dillard University, Harvard University, Morehouse College, Oxford University, Princeton University, Smith College, and Spelman College.