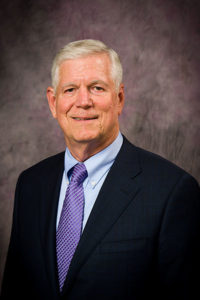 Richard Myers became the 16th President of his alma mater, Kansas State University, in 2016 after having served as its Interim President.  A retired Four-Star Air Force General, he had been the Kansas State University Foundation Professor of Military History and Leadership.  From 2001-2005, he served as the 15th Chairman of the Joint Chiefs of Staff and was the principal military adviser to the U.S. president, US Secretary of Defense, and the National Security Council.  He had been appointed Vice Chairman of the Joint Chiefs by President Clinton in 2000.  A highly decorated combat pilot, his prior commands included the North American Aerospace Defense Command, US Space Command, and the 5th Air Force at Yokota Air Base, Japan.  General Richard B. Myers Hall, the home of Kansas State University’s Army and Air Force ROTC programs, was named in his honor.  He has received numerous awards and decorations for his exemplary service to his country, which include the Legion of Merit, French Legion of Honor, and Presidential Medal of Freedom.