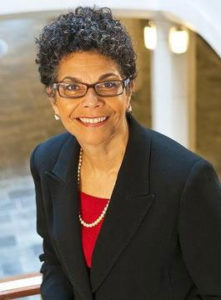 Phoebe A. Haddon became chancellor of Rutgers University–Camden on July 1, 2014. Rutgers University–Camden has significantly widened affordable access and expanded Rutgers–Camden’s role as an anchor institution in Camden and the Delaware Valley. Previously Chancellor Haddon served as dean of the University of Maryland Francis King Carey School of Law. Prior to her service as Dean of Carey School of Law, Chancellor Haddon served for more than 25 years as a distinguished faculty member at the Temple University Beasley School of Law. She has written extensively on equality and access in education issues as well as on matters related to access to counsel for civil litigants. In 2012, 2013, 2014, and 2015, she was honored by The National Jurist as one of the “25 Most Influential People in Legal Education.” She has received numerous other awards, including the Great Teacher Award from the Society of American Law Teachers in 2011 as well as the Trailblazer’s Award from the New Jersey Women Lawyer’s Association (2015) and the National Association of Women Business Owners in South Jersey (2016). In 2014, she was one of the Philadelphia Business Journal’s “Women of Distinction” honorees. Chancellor Haddon is a member of the American Bar Association’s Commission on the Future of Legal Services and its Kutak Award Committee. She serves on the Boards of Cooper University Health System, the Philadelphia Museum of Art, the Camden Health & Athletic Association, and HERS (Higher Education Resource Services). She is a member of the CEO Council for Growth and is a Class C director of the Federal Reserve Bank of Philadelphia’s Board of Directors, where she is designated as that board’s deputy chair for 2018.