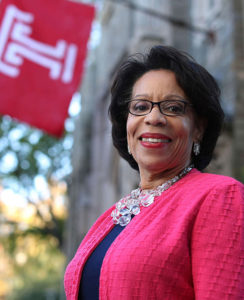 JoAnne A. Epps, has served as the Executive Vice President and Provost of Temple University since 2016.  Prior to her appointment as Provost, she served as Dean of Temple University’s Beasley School of Law for 8 years.  Her previous leadership positions include service as an Assistant US Attorney in Philadelphia and Deputy City Attorney for the City of Los Angeles.  A highly respected academic, administrator, attorney and community leader, she is an outspoken advocate for educational accessibility and affordability.  Her commitment to curricular innovation and experiential legal education garnered significant praise and national recognition for Temple University’s Law School.  Provost Epps has served on the City of Philadelphia’s Board of Ethics, which oversees election and public integrity laws.  Provost Epps also is a member of the Board of Directors of the Defender Association and served as the Association’s Board Chair from 199 to 2006.  She received the 2016 Spirit of Excellence Award from the American Bar Association’s Commission on Racial and Ethnic Diversity in the Profession.  The Philadelphia Bar Association awarded Epps the Justice Sandra Day O’Connor Award in 2009 and the Justice Sonia Sotomayor Diversity Award in 2014.