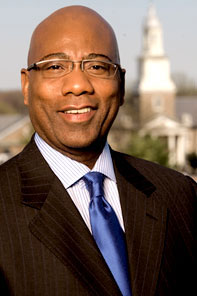 David Wilson, who was appointed the 12th President of Morgan State University in 2010, has a distinguished record of accomplishment and more than 30 years of experience in higher education administration.  Prior to his appointment as President of Morgan State University, he served as Chancellor of the University of Wisconsin Colleges and the University of Wisconsin–Extension.  Previously, he held numerous other administrative posts in academia, including Vice President for University Outreach and Associate Provost at Auburn University, and Associate Provost of Rutgers, The State University of New Jersey. Among the many honors and recognitions he has received are having been named one of the nation’s top 100 leaders in higher education by the American Association of Higher Education in 1998 and one of The Daily Record newspaper’s Influential Marylanders for 2011.  The University of Alabama conferred upon him an award for outstanding leadership in engaged scholarship in 2011.  He serves on the Board of the Greater Baltimore Committee, the Association of Land Grant Universities, and the Association of American Colleges and Universities.  President Barack Obama appointed him to his 11-member Board of Advisors on Historically Black Colleges and Universities.