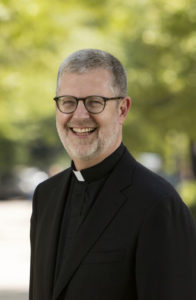 Dennis Holtschneider is Chancellor of DePaul University where he served as President from July 2004 through June 2017.  Reverend Holtschneider also is the Executive Vice President and Chief Operations Officer for Ascension Health.  His previous leadership roles include service as the Executive Vice President and Chief Operating Officer of Niagara University, academic administrative leadership roles at St. John’s University, and Director/Rector of Vincentian College Seminary.  He has written extensively on higher education strategy and governance.  Reverend Holtschneider has served on the governing boards of the American Council on Education, the National Association of Independent Colleges and Universities and the Association of Catholic Colleges and Universities.  He holds 7 honorary degrees, with the most recent having been conferred in 2016 by Soka University in Tokyo. Reverend Holtschneider received the American Council on Education’s Council of Fellows Mentor Award, was named one of Diversity MBA Magazine’s Top 100 under 50 Diverse Executive Leaders in 2012, and received a Giving Back Award from INSIGHT Into Diversity in 2016.