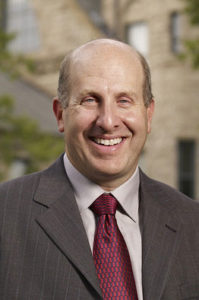 Marvin Krislov became the eighth President of Pace University in August 2017 where he is deeply committed to its mission of providing all students, regardless of economic background, access to the transformative power of education. Prior to his appointment at Pace, President Krislov served as President of Oberlin College for 10 years.  Prior to Oberlin, he was Vice President and General Counsel at the University of Michigan, where he led the legal defense of the University’s admission policies that resulted in the 2003 Supreme Court decision recognizing the importance of student body diversity. Throughout his career, Krislov has been a champion of access and diversity.  A Rhodes Scholar with three degrees from Yale, President Krislov’s prior leadership experience included service as Acting Solicitor and then Deputy Solicitor of National Operations in the US Department of Labor. He previously served as Associate Counsel in the Office of Counsel to the President during the Clinton Administration.